Crys Matthews was named the grand-prize winner in the 2017 NewSong Music Performance & Songwriting Competition after performing, along with other finalists, during a live music showcase at Lincoln Center for the Performing Arts’ David Rubenstein Atrium in New York City on Thursday, November 30. 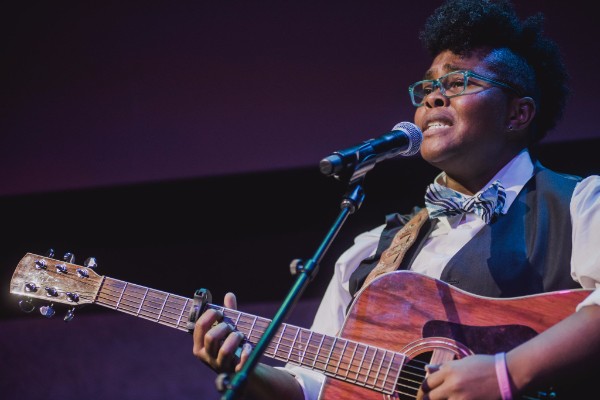 Now in its 16th year, the competition showcases emerging performing songwriters. NewSong Music is an independent music organization that aims to build a supportive community of performers and songwriters across various genres of music and skill levels, while identifying truly exceptional artists and introducing their music to a broader international audience.

Click here for a photo gallery of the live performance finals.
Click here to listen to the 2017 finalists playlist on Spotify.

“Each year, the NewSong Music Competition presents one of the strongest platforms for music discovery by giving many of today’s most talented singer-songwriters a way to connect with a wider audience. Its rich legacy of shining a spotlight on incredible artists continues with this year’s grand prize winner, Crys Matthews. While all of the finalists were compelling in their own way, Matthews won hearts and minds with her infectious folk/blues songs that boldly explored everything from the follies of the human heart to our current political milieu. By wrapping honest emotions around her socially conscious messages and dynamically delivering them with a warm heart and a strong voice, she lifted our spirits just when we need it most in these troubled times. ASCAP will be honored to showcase her at the 2018 Sundance ASCAP Music Cafe in January.”  – Erik Philbrook, ASCAP VP/Creative Director and NewSong Music Judge

“This year’s competition showcased the most talented and diverse cross section of the singer-songwriter category to date. We had musical theater, dark sad love songs and uplifting calls to action. Being a judge this year was challenging as each artist displayed talent and strength. Crys Mathews is a necessary voice. Her depth coupled with her openness and approachability was unmatched. She has a spark that is contagious and shares music that unites us and makes us think.” – Viviana Benitez, Associate Producer at Lincoln Center and NewSong judge

Matthews, a prolific songwriter — whose music blends Americana, blues, bluegrass, folk, funk, and jazz – has drawn comparisons to such other artists as Tracy Chapman, Ruthie Foster and Toshi Reagon. She recently released a new full-length CD, The Imagineers, as well as an EP, Battle Hymn for an Army of Lovers.

As the NewSong Music competition’s grand-prize winner, she will receive a six-song EP, recorded and mixed at Asheville, North Carolina’s Echo Mountain Recording Studios and released on the NewSong Recordings label; a featured performance at the ASCAP Music Café during the 2018 Sundance Film Festival in Park City, Utah; and future performance opportunities across the U.S., curated by NewSong Music.

“When my name was called, I was absolutely ecstatic,” said Matthews. “To be chosen as the grand-prize winner [from] among so many incredibly talented songwriters was an amazing feeling. To now be included among the ranks of artists I greatly admire – Rachael Kilgour, Wilder Adkins, Liz Longley – is just such an honor. I’m so grateful for every aspect of this experience – getting to play Lincoln Center, planting the seeds of so many new friendships among my fellow finalists, getting to record and release a new project and, thanks to ASCAP, getting to play at the Sundance Film Festival in 2018. I can’t wait to see what the future holds. Thank you for believing in me, NewSong Music!”

– by Michael Kornfeld, editor and publisher of AcousticMusicScene.com, an online publication for the folk, roots and singer-songwriter communities.